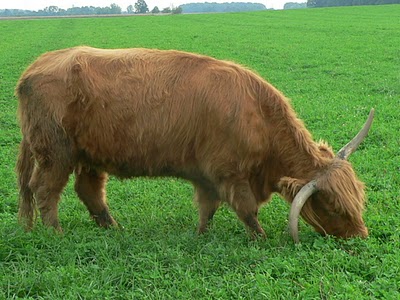 As promised, continuing from our last newsletter, here is a more in depth explanation of four of the top ten health reasons to eat grassfed beef.
According to a 2009 study that was a joint effort between the USDA and researchers at Clemson University in South Carolina, grassfed beef is better for human health than grainfed beef in these top ten* ways:
1. Lower in total fat

Grassfed beef is lower in TOTAL FAT than grainfed beef. Grass is a cows natural diet, so they are able to process it better.
Grain is fed to cattle to make them quickly gain weight.
Pasture-raised cattle are not given artificial hormones. Most grainfed cattle are given hormones to make them grow faster, forcing them to put on weight quickly, which results in a higher fat content.
The overall total fat content of pasture-raised cattle is usually about 25% lower than grainfed cattle.
Since grassfed meat is lean, it is also lower in calories. Protein and carbohydrates each have 4 calories per gram, whereas fat has 9 calories per gram, the higher the fat content, the higher the total number of calories.
2. Higher in beta-carotene
According to Descalzo et al. (2005), meat from pasture-fed steers contains significantly higher amounts of beta-carotene in their muscle tissues as compared to grain-fed animals. Concentrations were 0.45 μg/g and 0.06 μg/g for beef from pasture and grain-fed cattle respectively, demonstrating a 7 fold increase in beta-carotene levels for grass-fed beef over their grain-fed contemporaries. Similar data has been reported previously, presumably due to the high beta-carotene content of fresh grasses as compared to cereal grains.
Beta-carotenes are precursors of retinol (Vitamin A), a critical fat-soluble vitamin that is important for normal vision, bone growth, reproduction, and cell division. The overall integrity of skin and mucous membranes is maintained by vitamin A, creating a barrier to bacterial and viral infection. In addition, vitamin A is involved in the regulation of immune function by supporting the production and function of white blood cells.
A review of fatty acid profiles and antioxidant content in grass-fed and grain-fed beef: C.A. Daley, A.Abbott, P. Doyle, G. Nader, and S. Larson. College of Agriculture, California State University, Chico. University of California Cooperative Extension Service
3. Higher in vitamin E (alpha-tocopherol)
The meat from the grassfed cattle is four times higher in vitamin E than meat from feedlot cattle and, almost twice as high as meat from feedlot cattle that have been given vitamin E supplements.* In humans, vitamin E is linked with a lower risk of heart disease and cancer. This potent antioxidant may also have anti-aging properties. Most Americans are deficient in vitamin E.

4. Higher in the B-vitamins thiamin and riboflavin
Thiamine, also known as Vitamin B1, helps to maintain your energy supplies, coordinates the activity of your nerves and muscles and supports proper heart function. Riboflavin, Vitamin B2, helps protect cells from oxygen damage, supports cellular energy production and helps to maintain your supply of other B vitamins.*
* From WHFoods, www.whfoods.com