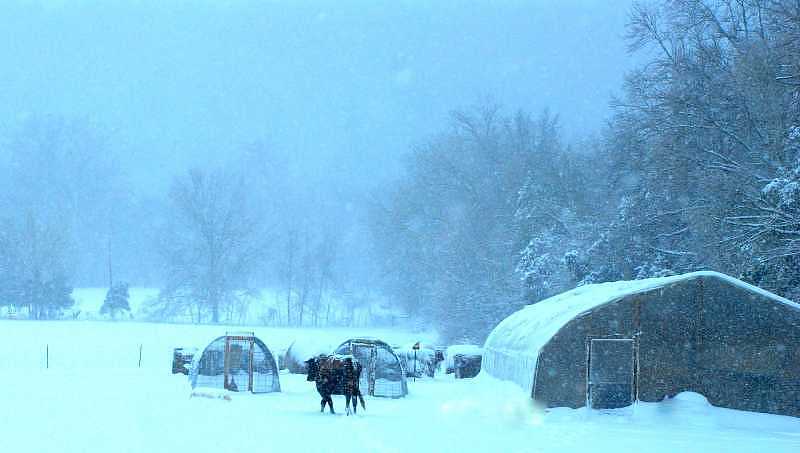 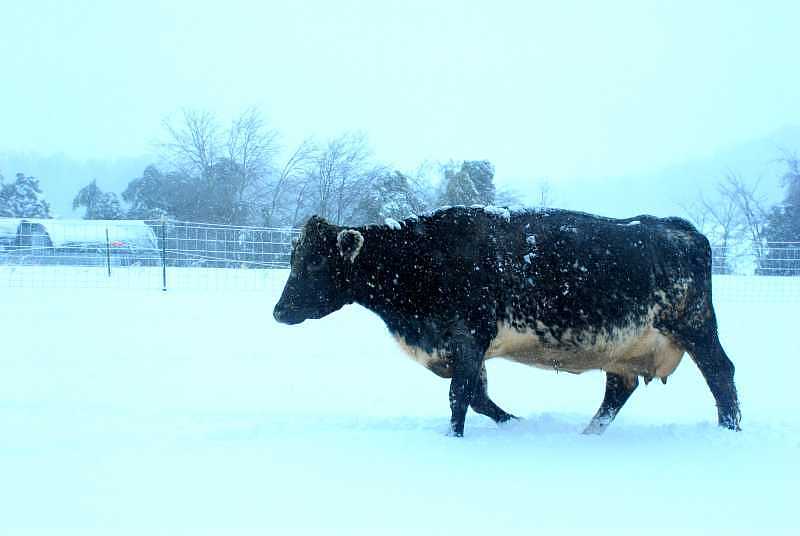 I’ve just come in from my pasture inspection and I just couldn’t help but remember what things were like on the farm one year ago.  Baby Indi was just born (yesterday was his birthday) and Baby Michi was born in several inches of snow (today he is one year old).  Both babies came into the world in the midst of a winter storm so I just had to include a picture from their first days on the farm.

This year I couldn’t even get a decent picture due to the mud and dreariness of the farm, nothing looks especially photo-worthy today.  The sheep are covered in hay and their fleeces are soaked and flattened by all the rain and now I’m thankful that we didn’t shear in the late fall as I had planned.  The cows have their heads stuck in bales of fermented, alfalfa hay that I can smell the minute I step outside and the pigs are filthy, as they love to be, rolling and dragging their fat ladened bodies through every inch of mud on the farm. The ducks have forsaken their beloved baby pool in the greenhouse for the the real ponds forming in every low spot on the farm and the chickens are in worm heaven, pulling up worm after worm after worm.

Several climatologists are  predicting that we might not get any more freezing weather and just the thought of that causes us to shift our thinking, trying to remain one step ahead of the bugs that will be nestled safely in our soil ready to devour everything in sight.  Right now one of our thoughts is to till up everything in the greenhouse and allow the chickens and ducks to do their part at scratching up anything and everything still settled in the soil but that’s a drastic move that requires some really planning.

Being a farmer has helped me to truly understand that control is pure illusion! We never lose control – we never have it to begin with!  I can buy the same amount of hay every year and come spring, I always either have too much left or I’m scrambling to find another 20 rolls.  I can decide to wait to plant native cool weather grasses just in case we get an early frost and then the fields will be a mud pit the entire window for early planting. Sometimes things work out, like not shearing late but it’s just a fluke – not a wise decision on my part.  Understanding this truth is one important key to a peaceful life – leaving both the credit for the things that work out and the blame for things in chaos on the table and keeping my attention on the things of today.