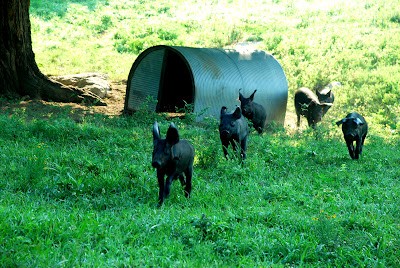 For 20 years I have gradually coasted down that slippery slope from homesteading to full time farming and through all those stages I have never had single pig wallowing in my muck.  Oh how times have changed!  Brayden decided that he would like try his hand at raising pigs and presented the idea by explaining all the wonderful things a pig could do on the farm.  They are great at composting and excel at rooting up small trees which could help us to open up the brushy areas around our pastures while still leaving all the large trees that provide shade for our animals.

OK, one pig wouldn’t be too bad.  Well, pigs turn out to be social creatures – who would have known, so the number quickly increased to two pigs. 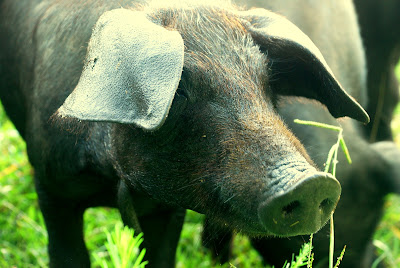 The Homesteading Way to increase stock is to barter or trade with another farmer so I put out the word that we were interested in pigs and had a Scottish Highland up for trade.  Andy Roddick quickly raised his hand and put up four pigs as a fair trade.  Did you notice how we went from two to four pigs?  It’s obviously the frog in boiling water syndrome happening here and before I knew it Andy loaded up the pigs, all thirteen of them, and made the trek from Blackbird Heritage Farm to River Cottage Farm and through the generosity of a farmer who always wants the other to come out ahead we were thrust into the business of pork.

I have to admit that I love the pigs. They are very social and come running whenever you enter the scene which always makes you feel loved, even if you wouldn’t hug a pig to save your life.

We plan to use the pigs to renovate pastures and root up areas that are damaged by left over rolls of hay.  We will move them through the wooded areas and utilize their bulldozing snouts to turn the gardens. We will keep you posted on how Polly, Chester, Guenevere, Apollo and Athena and the rest of the yet unnamed pigs work and live on River Cottage Farm.