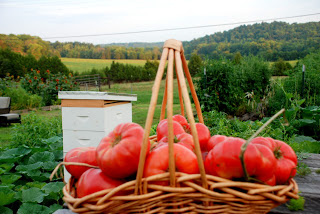 I believe that being too busy to lay in the hammock or to drink my coffee in the garden should be considered as close to sinful as did the Desert Fathers of long ago.  They believed that sloth was not so much a condition of laziness but more a failure to see God in all that we encounter.  “Take from me the spirit of Sloth” in the beautiful prayer of St. Ephrem the Syrian in the 4th century was more a call to awakening our sleeping senses than a cracking of the whip for longer work hours.  This spring our work load has been busier than we like and I had only to see the lag between blogs to be bombarded by the flashback of three months of long, hard work and little, if any, rest for body and soul. 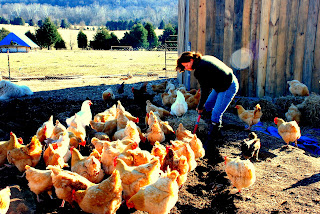 So far this summer we put in 1400ft of water line with spigots and permanent waters every 300ft for stress-free drinking for the livestock.   We planted and maintained 16 raised garden beds, 20 heirloom fruit trees, 20 blueberry bushes, 25 raspberry bushes, three grape vines, 50 asparagus plants, 50 artichokes and 300 square feet of herbs.  200 broilers were moved around our farm daily in a bit of a bovine/poultry waltz where the two moved as one but were forbidden any actual contact. 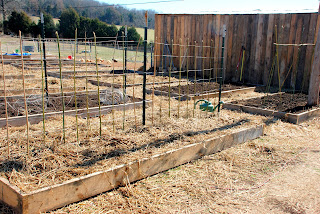 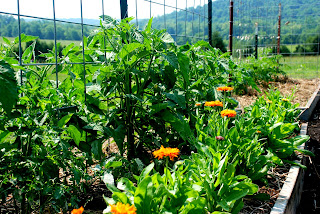 100 baby Rhode Island Red chickens are now roaming freely around the gardens keeping them as weed free as possible.  We have 400 broilers at different stages of life growing on the pastures right now.

I keep reminding myself that they are fertilizing our fields so that I will not have spend another $1500 this fall to bring in chicken poop to balance the nutrients for the microbiology in the soil that is River Cottage Farm.  All that fertilizing comes with the task of building a new portable chicken coop for every 50 chickens.  Thankfully our wood reserves comes from construction companies who are happy to have left overs repurposed rather than sent to landfills. 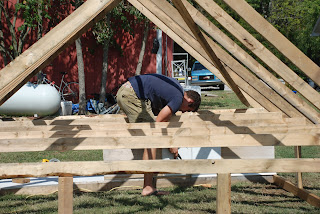 All the months of planning for 4400ft of new fencing has been more work than I like to remember.  With several badly planned pastures under my belt I am determined not to make the same mistakes again.  Now the real hard work begins with Brayden digging holes for all the cedar posts, stringing wire and hanging gates. When the fences are completed our mere four pastures will become 12 distinct paddocks for rotationally grazing all our livestock.

Thankfully the three of us keep each other as balanced as possible and we have a strict plan to slow down and smell the roses.